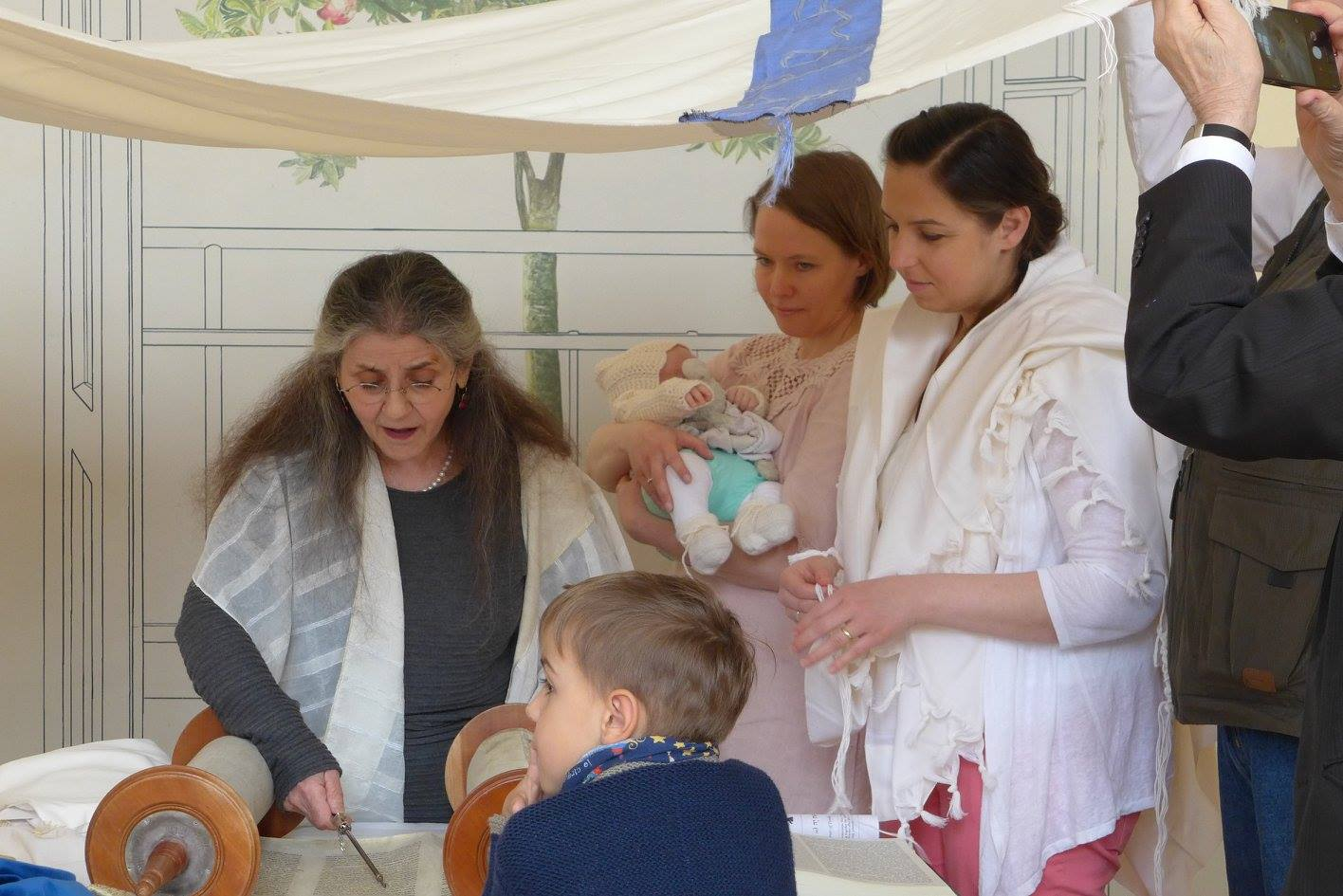 The room was decorated festively and pessachdik for the 36 guests and their children. After a joyous welcome, we took our seats at the u-shaped table, at the center of which there was a lot of room for the children to play. It was a lot of fun to watch the children meet each other through play. Our Cantor Jalda led competently through

the Seder, as always. Thanks to Annette Bökler's Hagada, each of us could follow through history, prayer and song in their own language.

As always, the meals of our amazing chef Anna were a delight. She pampered us with many delicacies.

Every one of us took their own exodus from Mizrajim. To me personally, it was a joy to watch four generations celebrate the eve of Seder, not only in Berlin, but in the whole world.

We took our goodbye with the words “next year, again in Berlin”.

Many thanks to Jalda, Anna and their helpers, who made this beautiful evening possible.

As has become custom, the Ohelistas and their friends and family gathered in the Remise in Gatow. It was neither really winter nor cold, but the great cast-iron stoveoven was churning out calming heat and light, casting the whole room in a dim twilight. A comfortable warmth welcomed us.

One after another, they all arrived: Big and small, the children with their handmade Chanukkiot, the adults with their own, handed down to them by the trusty hands of tradition from their mother, father or other relatives to never let the light fade.

As a representative of the 'temple band', Bert had prepared songs and handed out lyric sheets so all could sing along.As Jalda began the celebration, the room was packed with faces full of expectation – and ever more arrived.

From what side do you start lighting the candles? Left to right? The other way around? The newest candle first? What’s with the ninth candle? Which Brachot are there to say? Jalda didn’t leave us in the dark for too long and explained to us the purpose of the ‘Shamash’. Soon all was clear as day: You place the candles from right to left, then light them from left to right, ‘newest’ candle first – for that candle, we say the Bracha.

The sixth light was lit.

And then we told the story of Chanukka – a story not written in the Thora, yet so very Jewish and important for all of us: We told of our battle against the occupying forces, their decree forbidding the Jewish way of life and our rites of celebration, our commemoration days and our access to the temple. We told of our ruses to continue teaching in the Jeshiwa. We told of the Dreidel game as a deception during inspections.

But the Greek weren't trying to ban the Thora or prayer: Instead, they sought to put reason, logic and science over spirituality, holiness and purity. But being Jewish means bringing the holy into the material aspects of everyday life, as to not succumb to materialism, the development of trends and the random reassignment of values.

And finally, we told of the most important part; of success and victory, of ejection and the retreat of the enemy; of the restoration of the temple that was almost a complete reconstruction, so severe was its defilement. And then of the seeming impossibility of the temple’s candles burning long enough until new blessed oil could be produced – 8 long days, although the pitiful remaining rest was barely enough to light them for a single day. The Greek intention for that light to be lit with impure oil was thwarted – it is not whether or not that light shines, but about who and by what means that light is blazing. And we pass that light on, from generation to generation.

All had gathered around the many burning Channukka candelabras and listened spellbound, discussed, shared their version of the story passed down to them by their parents and grandparents.

For every Jewish holiday, there has to be a tasty and expansive feast – again crowned by a delicious soup made from the pumpkins of our harvest and the many different dishes that were brought. There were Sufganiot aplenty. Not to forget the conversations between one another. Our guests, close friends like Pfarrer Christian Zeiske and his wife Dorle, who only recently moved from Prenzlauer Berg to Charlottenburg, added a lot to the discussion.

And of course, there was a lot of playtime: Nun, Gimel, Heh and Schin led to lots of laughter and nobody cried for their shrinking pile of peanuts... It is a joyous celebration, even the washing up and the cleaning afterwards as a thanks to Rita and Ulli was easy as pie. Filled with light, warmth and confidence, we went home late at night.

Around twenty Ohelistas, among them, as always, many children, gathered for the Taschlich in Rita's and Ulli's grange in Gatow. Anna prepared small 'ships' and paper, both of course completely water soluble. In this way, everyone could put to paper the things they wanted to get rid of for the new year of 5778 in order to put it on one of the little ships. The fleet was then decorated with fresh petals from the wonderful Botanicum. They dissolved quickly and left a many-colored sea of flowers – a beautiful sight that left nobody cold. A little girl that coaxed a clear and long sound from the ram's horn effortlessly showed everyone that Ohel Hachidusch doesn't need to worry about their offspring. The evening was of course rounded out with a tasty meal, complete with apples from our field dipped in honey. It's supposed to be a good and sweet year 5778, after all.